I’m looking for an app about… dinosaurs

We’re back! And after a long break, we’re ready to share some of our favourite apps again. Over the summer holidays we got into a few different dinosaur apps, so I decided it was time for a ROOOAR-tastic round-up post.

This summer Little Miss Chatterbox became a huge fan of Dino Dog from Story Toys/Jason Tammemagi. This is a brilliant maze game which gradually ramps up the difficulty level without ever being too tricky for the 3-6 age group. You help intrepid explorers Dino Dog Doug and Bonnie the Bear to find fossils underground by digging tunnels in the earth and overcoming obstacles along the way. Then you clean up the bones and put together dinosaur skeletons, which go on display in your museum. The levels are brought together into an overarching adventure story by fun animated segments between each dig. Once you’ve made a skeleton, you can also see facts about it in the museum. Little Miss Chatterbox spent ages playing this, and when she had finished all twelve levels she went back and did them again.

Compatible with iPhone, iPod Touch and iPad. Available from https://itunes.apple.com/gb/app/dino-dog-digging-adventure/id886619142?mt=8  priced at £1.49/ $US1.99 at time of writing. Thank you to Jason Tammemagi, the game’s creator, for our copy. Jason has a fantastic blog at http://jasontammemagi.com/blog

Dinosaur Mix from Cowly Owl was another hit. This is an open-play app in which you build a mixed-up dinosaur from different dinosaur eggs, and then set it loose in a forest or a volcanic plain environment to play with. At first glance it is a very simple app but we found it very engaging. You have complete control over your dinosaur and it’s fun to experiment with it. For example, the dinosaur walks past more eggs along the way and so your child can choose whether to swap dinosaur parts for new ones. As we went along Little Miss Chatterbox was very firm about what she wanted, saying “He’s hungry, he doesn’t want to change at the moment, he wants some food!”  or “I’m going to make my dinosaur all blue!” (Warning, this requires a LOT of patience to wait for the right eggs!) It would be great to have a little more variety to the backgrounds and interactions, but overall the simplicity makes it very accessible and fun for even the youngest of players.

For value for money you can’t get better than the Andy’s Dinosaur Adventures game within the free CBeebies Play Time app. Fans of the television show will love it! You play with dinosaurs and earn more dinosaurs by looking after them. You can change their pattern and colours, feed them the right foods, create your own terrifying dinosaur roars with the microphone, and learn dino facts at just the right level for preschool brains (did you know a Compsognathus is the size of a chicken?) The very best part is putting your child in charge of a dinosaur safari! By moving the tablet or phone around the room (making sure they don’t trip over anything as they go) they can find dinosaurs in the wild and take pictures of them. Huge amounts of fun and surprisingly realistic.

Compatible with iPhone, iPod Touch and iPad. Available from https://itunes.apple.com/gb/app/bbc-cbeebies-playtime/id684211403?mt=8 – FREE at time of writing. 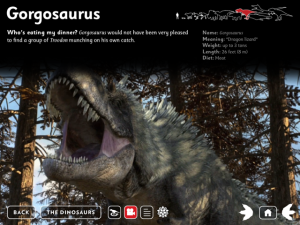 Finally, for older readers and more detailed factual content, we’ve dipped in to March of the Dinosaurs by Touch Press. This is packed with very accessible facts, in a story following dinosaurs like Scar the Edmontosaurus as they move through the Arctic seasons, using fantastic images and video clips from National Geographic programme Escape of the Dinosaurs. The Meet the Dinosaurs section is the most interactive part, allowing you to rotate and examine each dinosaur, read facts and see them in action in short video clips.

What apps about dinosaurs would you recommend? Add your thoughts below…