All About Giraffes with PJ’s PJs

Ink Robin have made some of our favourite apps (see previous posts here and here) and they have come up trumps again with a new series of book apps about animals. Percival Jenkins (PJ) has a huge range of pyjamas to choose from  – and when he puts them on they take him on some surprising and exciting animal adventures. We have been reading the first instalment, all about giraffes.

When PJ goes to bed, his bedroom becomes an African plain, and he himself becomes a giraffe! Ink Robin are great at stories blending reality and fantasy, and cleverly use the ability to alter illustrations at the touch of a finger to move between the two worlds. I like the way the sun and the monkey feature in both scenes:

The story centres on Percival getting to know his fellow giraffes, who are treated to a big hug when he first meets them. 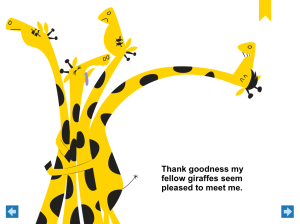 This provides the opportunity to squeeze in lots of facts about giraffes in a fun way. You can compare the giraffe’s neck to others by seeing them in a line up, watch some less than impressed giraffes having a bath, and make PJ the giraffe’s long tongue stick out with a party hooter noise.

I love the fresh, bright illustrations by Gustav Dejert, particularly the expressions on the faces of the animals. You can see more of his work on his blog A Dog in a Hat. The story is funny, not overly long and is easy for children to follow without getting distracted by the interactive elements, which are simple to use and always linked to the story. It has true picturebook appeal in that the text and illustrations are so closely woven together to make the humour work. I did feel the ending was slightly abrupt, as PJ goes from being a tired giraffe on the African plains to asleep in bed as a boy again without any warning or additional text. However there is then the option to read an excellent straight recap of 5 Giraffe Facts which were woven into the story. Having seen screen shots of the other two stories about koalas and anteaters, they look just as fun as this one and I think all three would make a great set.

PJ’s PJs – Giraffes!, developed by Ink Robin, compatible with iPhone, iPad, and iPod touch. Available from https://itunes.apple.com/gb/app/pjs-pjs-giraffes!/id776058142?mt=8 priced at £1.99/US$2.99 at time of writing. Two sequels are also available – Koalas and Anteaters.

Disclaimer: I received a free copy of this app as a subscriber to Ink Robin’s e-mail newsletter, but was not asked to write this blog post and it represents my honest opinion.

One thought on “All About Giraffes with PJ’s PJs”