The nominations for the Cybils 2013 are now officially open! And as part of the Children’s & YA Bloggers’ Literary Awards, you can now nominate your favourite book app.

Nominations are open until 15 October 2013. But how to choose? Mary Ann Scheuer, Chair of the Book App judging panel, says “Book apps are stand-alone applications on a touchscreen device like the iPad that combine features of books, audiobooks, ebooks, animation and video creating a unique experience for readers of all ages…. The best book apps engage readers as they enter a story world or explore a  nonfiction topic. The reader plays an active part in the experience,  turning pages, triggering animation, tapping characters, solving  puzzles.  The interactive features must build on the overall reading  experience and not distract readers from the main flow. “

All book apps must be available for the iPad (even if available on other platforms too) and must be in app form – iBooks are not eligible. They must have been originally published on the App Store between 16 October 2012 and 15 October 2013 (you can check release dates on http://appshopper.com). See the Cybils FAQ and the full description of the Book App Category for more information.

I’ve gone back through my blog posts from the past twelve months to pick out a few of the stand-out apps from the year. There are so many fantastic apps out there to choose from, but I’ve purposely only picked apps which I know well and have written about on the blog. You can click on the screen shot to go to each post: 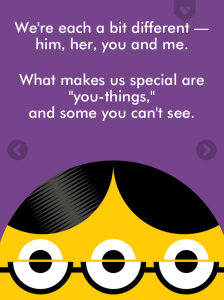 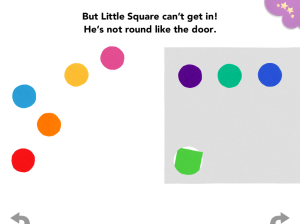 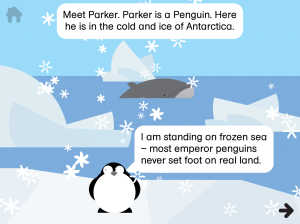 What is really interesting is that in posting this, I notice three of the apps are about finding your own identity and acceptance of difference in others (Wee You Things, Four Little Corners and Lucy Ladybird.) I’ve also selected two apps from Nosy Crow because their book apps are of such a high quality.  For my Cybils nomination, I was going to pick Little Red Riding Hood because I think it is the one which ticks the most boxes in terms of storytelling, illustration, interactivity and innovation. But someone beat me to it this morning! So I have nominated Lucy Ladybird because I think it is a very successful adaptation of an existing picture book, bright and colourful, where the reader also plays a role in the story.

I really wish I could nominate all the apps on my list!  If you have enjoyed one of the other three apps, please do consider submitting it by 15 October. Each app needs only one nomination to go on to the next stage; I’d love to see all five considered by the Round 1 judges. And I can’t wait to get involved as a judge in Round 2 in early 2014.