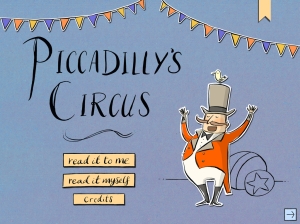 Roll up, roll up, for one of my favourite apps of the year! Piccadilly’s Circus is a fabulous, roller-coaster tale of what happens to a circus troupe when their ringmaster is sick and they decide that the show must go on. But first they bicker about who should be ringmaster, then they decide to swap roles for the night, which leads to some hilarious and dramatic results…

My children and I love the story of Piccadilly’s Circus, which stands out due to its brilliant sense of humour and playfulness. Just for starters, there’s a fire-eater helping to cook pancakes, lions playing table tennis, and monkeys causing havoc in the candy floss. The interactivity is almost all – hurrah! – linked directly to the story. The reader puts the spotlight on to the bear as ringmaster, sets up the cannon for the dancing dogs to be shot out of, and helps to bring the house down (literally) with the elephant on the tight rope. I also really like the fact that the narration continues while you interact with the story, as I find it frustrating in so many other apps when it stops.

The illustrations by Adam Larkum are superb, bright and full of character. All of the performers are outlined in white and look almost like stickers coming off the page. There is so much detail to enjoy. Take one scene: Mr Piccadilly the ringmaster is relaxing in his caravan with a hot drink and the radio, saying “What a pleasant break this has been” … and from the corner of your eye, you see a small dog in a helmet go flying past the window. 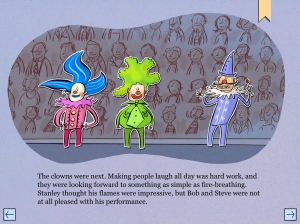 Any negatives? I really struggled to think of any. There is a lot of text on some pages, which usually I don’t like, but in this case it doesn’t bog the story down or feel too text-heavy. All in all, Piccadilly’s Circus is a fantastic book. I wouldn’t be surprised if, having come to the last page, you immediately want to start reading it all over again.

We also really enjoy another app by Ink Robin – Leonard – which is all about a boy who moves to the country and goes in search of children to be friends with. He takes with him his imagination and a less-than-impressed cat. A clever “Imagination Button” lets the reader transform scenes from reality to fantasy, some of which differ on each reading. It’s a really clever and fun book which I highly recommend. 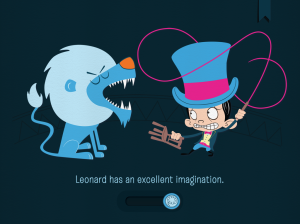 Thanks to Ink Robin, I have two codes for Piccadilly’s Circus to give away!  To enter, simply leave a comment below this review before 18:00 BST (British Summer Time) on Thursday 18 October 2012. Maybe you could use the opportunity to tell the world what circus performer you would be! I will use www.random.org to choose two winners. If I cannot contact a winner before 25 October 2012, I will draw another. Code expires on 4 November 2012.

Why not also read my interview with Ink Robin, in which they tell us about the new books they are planning and why storytelling is at the heart of what they do.

EDIT 18 OCTOBER– and the winners are… readitdaddy and Jo Bowers! Congratulations, your codes are on their way. (NB Draw made from 1-8  not 1 to 10 as comment 7 was a pingback and comment 10 was from Ink Robin.)