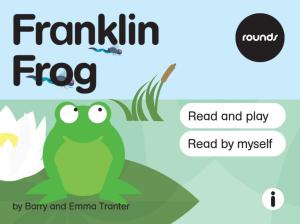 Ribbit! Say “Hello” to Franklin Frog, the latest creation from Nosy Crow, and the friendliest frog on the lily pad.

Franklin Frog is Nosy Crow’s first non-fiction app, and the launch title for their new Rounds series written by Barry and Emma Tranter. Each app takes a look at the life cycle of a different animal, whose story ends where it began. This clever concept takes full advantage of new ways of storytelling on the iPad. In fact, the transition is so seamless that the first time we went all the way through, it took us a moment or two to realise that we had started all over again with a new character, Franklin’s son Fraser.

We first meet Franklin as he explores his world, hibernates, and then finds a mate who lays her frogspawn in the pond. Then we meet one of the tadpoles, Fraser, and watch him grow up into an adult frog. There are many facts to pick up along the way, but they are presented in a very chatty way by the frog characters or the child narrator. I really like the way Franklin asks the reader to help him in his journey – to jump across the pond, to catch food with his long, sticky red tongue, or to find somewhere to hibernate. My children enjoyed doing this, and so absorbed the facts easily along the way. And at each stage you can spend as long as you like hearing more information, or move on.

As you would expect from Nosy Crow, this is a super-smooth and above all fun app to use. Flicking and swiping movements are used to make Franklin jump and swim, while you tap the screen to catch food with his tongue. 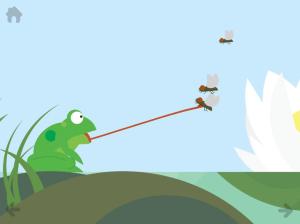 You can really tell a lot of thought has gone into making the app. The illustrations are all made from circles and parts of circles as a nod to the Rounds theme. The original music has a nicely aquatic feel to it. The text is clear and easy to read, with word highlighting. A helpful blue dot shows where to press the screen to interact with the story, and bouncing arrows show when you can move on to the next page.

We have returned to Franklin Frog frequently, and I’m looking forward to seeing the next Rounds app about penguins due for release in November.

To round off (sorry!) this review, a challenge for you: one day Mr Tall wanted to know just how many generations of frog there are in the story… so we kept going round and round until we found out. Now… can you? 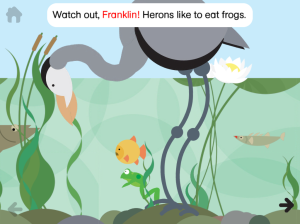