It’s time for the second of our activity days based on a favourite app, and this time we chose Pirate Scribblebeard’s Treasure. Developed by Kidoodle Apps, this is our most-used drawing app.

Pirate Scribblebeard’s Treasure is essentially a colouring book, with a little extra magic. Oscar and Josephine, two young children, introduce the story. There are sixteen pages to complete, such as drawing the pirates, completing their ship, making a treasure map, imagining a sea monster and designing a flag. But each page has been partially started to get your creative skills going; the pirate ship is based on a bath, and the sea monster on a banana. There are also prompts to help you – “What be in this treasure chest?” is just one example. While some children might find this a little constraining, it is brilliant for those like my son, Mr Tall, who is lost when faced with a blank piece of paper but can get straight to work when given some guidance. Oscar and Josephine also give encouraging comments as you draw. You can see Mr Tall’s drawing of a pirate’s dinner below. 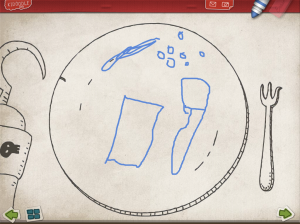 When you have finished each picture, there is a nice short animated sequence, such as your newly drawn pirates dancing, or ship rats eating your treasure map. You can save a copy of the picture in a frame, or email it from the app. The pictures are saved until the next time you play, but can be deleted easily from the menu too.

Improvements which could be made? There is no way to turn off the jolly pirate music, which we love but might irritate some parents. And although when you complete the book it tells you “more pages are coming”, we haven’t seen any new pages since we purchased the app late last year. However, at 69p it already offers a great deal of value and shouldn’t be missed.

Pirate Scribblebeard’s Treasure, developed by Kidoodle Apps, compatible with iPad only. Available from http://itunes.apple.com/gb/app/pirate-scribblebeards-treasure/id459203312?mt=8 priced at £0.69/$0.99 at time of writing.

This blog post is the second in a short series as part of Cafe Bebe Savour Our Summer. We’re taking some of our favourite apps and using them as inspiration for fun-filled summer days. Source for pirate faces and maps: http://www.dltk-kids.com/crafts/pirates/crafts.htm